The Purbeck Group comprises the Lulworth Formation (three members) overlain by the Durlston Formation (two Members).  The Purbeck Group was deposited over a period of some six million years (146-140my).  The relation of these modern names to the traditional Lower, Middle and Upper Purbecks is shown in the chart below, focussing on Building Stones.  The Middle Purbeck or “Upper” Building Stones lie within the Stair Hole Member (18-40m) of the Durlston Formation. 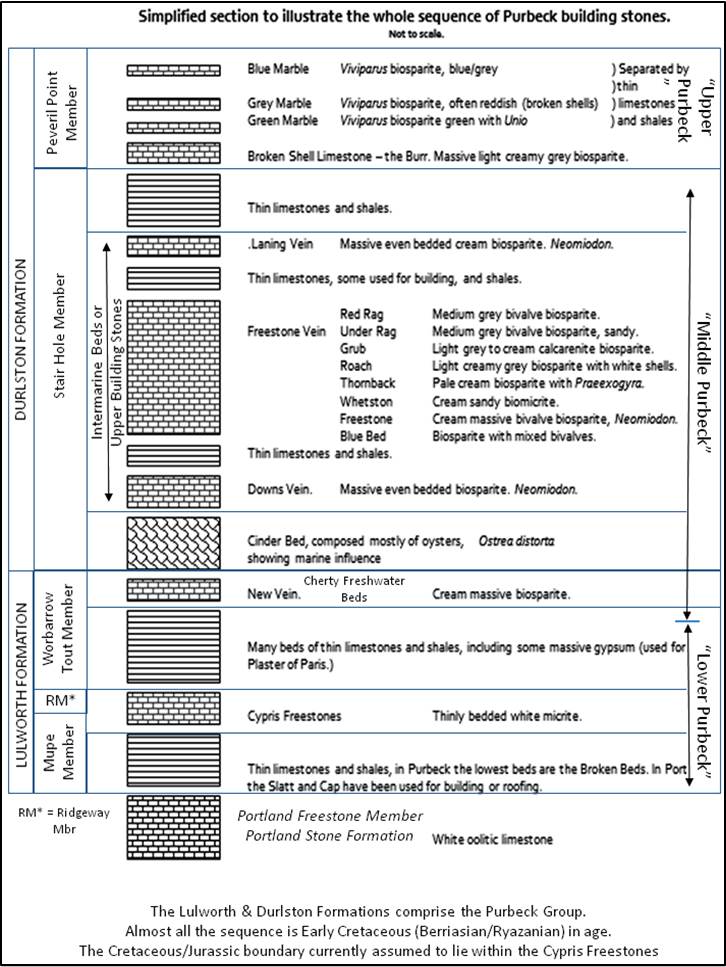 The Middle Purbeck limestones were deposited at Mediterranean latitudes in a vast system of brackish to freshwater lagoons and lakes. The shallow water limestone beds sometimes have dinosaur footprints on their upper surfaces.
The Upper Building Stones, or Intermarine Beds, are medium to coarse cross-bedded shelly bioclastic limestones.  Small bivalves and gastropods are very common in the upper part.
The Cinder Bed (not a building stone) contains oyster shells with occasional echinoid debris, indicating a brief marine incursion.  The base of the Cinder Beds was once assumed to be the base of the Cretaceous but this is now put within the Cypris Freestones.
As the chart shows, there are ten limestone beds quarried within the Intermarine Beds .  These are best illustrated by reference to a CD “The Purbeck Limestone Group – Virtual Geology Field Trips to Purbeck limestone quarries in south Dorset” by Dorset’s Important Geological Sites Group. This CD can be purchased via http://dorsetrigs.org.uk/publications/
The copyright belongs to Patricia A. Snelgrove on behalf of the Dorset’s Important Geological Sites Group.
Some of these limestones are illustrated below –  cut slabs, some vertical, some horizontal. (scales vary) .
Text PS & WGT, Images JT April 2017