Description
The village is located in the Blackmore Vale in north Dorset and sits above the River Stour. The present building consists of a chancel built c. 1882, a 14th century north chapel, a nave with a late 14th century north aisle, a south aisle and a porch of c.1852. The west tower is 15th century.
The only Romanesque architectural sculpture is a pier with capitals that forms part of the north arcade. A 12th century font bowl also survives, now located in the south aisle.
Courtesy of the Parish Priest and Churchwarden, the floorplan (as provided them for restoration of flooring) was made available for me to record the majority of stone types with good stone texture remaining, along with a Key to allow visitors to better explore and understand them. (please note that not all the brown coloured stone in sections marked B is Ham Hill Stone as any oxidised coarse oolite may also be quite red-brown.)
The ages of the floor plan progress from the north to south as North Chapel, North Aisle Nave and Chancel and South Aisle/porch. The Romanesque pier is in the Key - labelled F & H in the central North arcade. 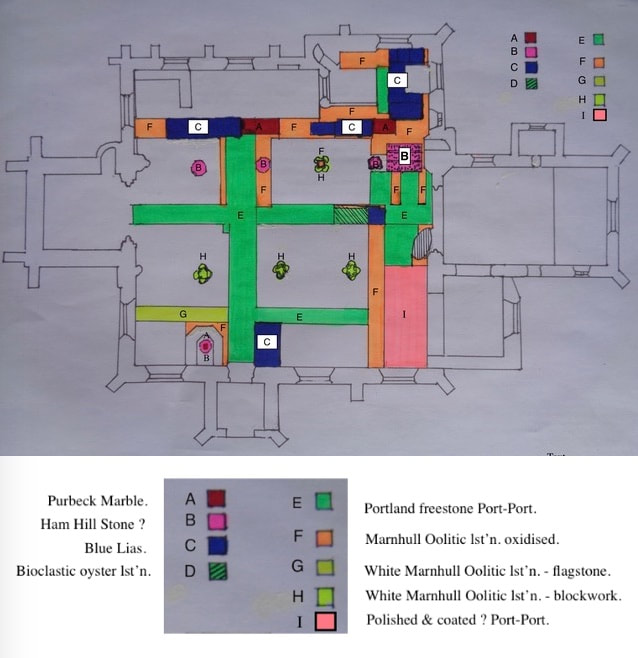 Fig.1
Structural building and flooring stone was historically Marnhull quarried stone with doubtless occasional Todber quarried stone held locally but by the Victorian period replacement of walkways turned to harder Portland oolitic limestones marked E & I above. Both Marnhull and Todber freestones are Corallian.  Solenopora, a calcareous alga seen centrally and dotted below, is found in E slabs notably below the pulpit, to identify it well as Portland Freestone from the northern part of the Isle of Portland.  Image 4 from the very dirt-embedded yet polished surface of walkway I reveals typical degraded Portland oyster shell, something also common in all the walkways labelled E. 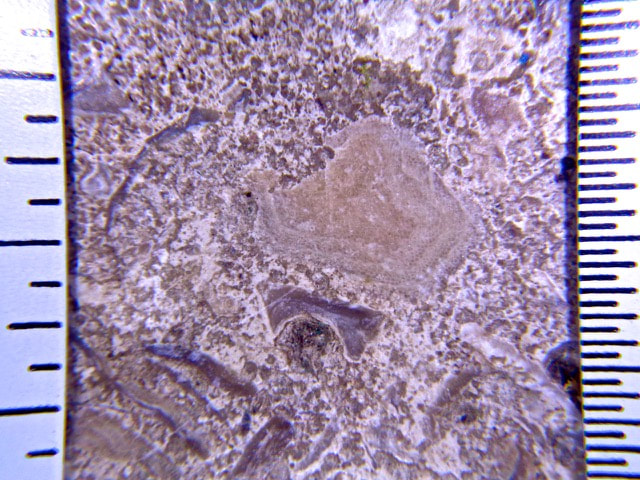 Image 3.
Please note that all scaled images are 20mm. X 20mm. and the metric grade scale is in 0.5mm divisions. 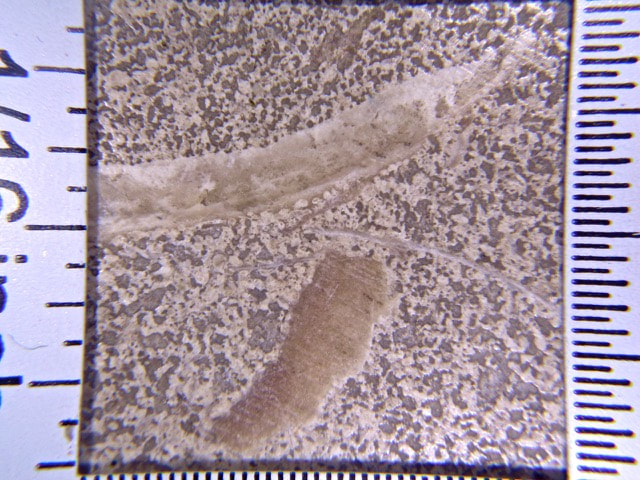 Image 4.
The earliest built stone is in the Romanesque column of white Marnhull oolitic freestone of which some darker blocks are far more shell-fossil rich but not oxidised brown.
However, see below where the capital of this column has coarser grained Marnhull freestone with oxidised iron bedded ooids and fine broken shell uppermost.
Later additions to the north arcade are columns of Ham Hill Stone and increasingly together with Upper Greensand (also known as Shaftesbury Sandstone) looking back in time from the west wall to the chantry archway. These two kinds of stone, along with the best Marnhull freestone can be sawn into large, dimensional pieces because of their often massive bed thickness - commonly 1.3 metres at Marnhull. The arches above this arcade are also of Ham Hill Stone and it should be noted that the usual red/orange colouring and often very darker bedding so typical of this stone is noticeably absent in much of the archway blocks. Perhaps the more granular texture and less oxidisation may well have been sought-after by quarrymen of 6-7 centuries ago? Using a wet sponge; a scaled photo was taken, and that revealed a much more granular texture in Image 12 below.​
The 1862 pulpit is made from the best Marnhull oolitic limestone with an average amount of disseminated fossil shell and with more than one turreted gastropod in it.
Medieval alabaster, much favoured for effigies was easily marked -even seriously damaged and geologically-speaking, it is gypsum.  When translucently colourless it was most accurately sculpted to form ghosted effigies of the local heroes, patrons and their families, often on table top/chest tombs. In this case the tomb chest is of the Carrent family (c.1470) and made of sculpted Ham Hill Stone facings.
The fonts have been changed and moved from the west of the north aisle to the now south aisle near the entrance. The octagonal base is considered an1852 replacement, the stem is an hexagonal Purbeck Marble drum and square bowl (considered 12th century) probably re-cycled from the base of an out-of-doors cross shaft. Such a cross was often a place of ministry and worship before a chapel or church was affordable. This bowl is made of a cross-bedded broken shell limestone; it may well be of Ham Hill Stone but there are naturally formed casts and cavities in it not usually associated with that stone. An unexplained hexagonal 19th century oolitic limestone font bowl may be found loose near the back wall towards the pulpit.
The north aisle arcade was added in 1852. It is all confirmed by the disseminated black shell and turreted fossils, to be of the same stone as the pulpit and matching best beds now obtained from Whiteway Quarry.  Dimensional stone just to the north of today’s quarry was quarried in Victorian times.  Looking through and behind the photos of the south arcade can be seen the white Marnhull ‘squared coursed rubble' walling above the Ham Stone arches. In the next photo far into the North Chapel is the new piscina, a replacement.  The original was of Wardour Lower quartz sandy Building Stone also known as the MBS, quite commonly seen elsewhere but all parts of this new one are of Marnhull Oolitic Limestone. However, with no draught this stone may respond badly to water,
The Pope family ledger is unusually preserved if it is of Blue Lias, which its fossils strongly suggest, against written statements it is Belgian Black.  Scaled 20x20mm fossil photos follow.
The Hussey slab is also well preserved but a century younger.  Other St Gregory Blue Lias ledgers are variously de-laminated and worn.  Very good fossil casts and burrows are to be seen in the floor stone of the porch. One beautiful north aisle Purbeck Marble ledger stands out with many complete fresh water Viviparus shells that may be clearly seen in its well-polished surface. Another ledger in the North Chapel is badly worn and weathered.