There are two distinct building stones of the Forest Marble Formation: the Forest Marble shelly limestone (FMSL) and the Forest Marble sandstone (FMS). William Smith the “Father of English Geology" accepted this already established name for Geological use in 1799 (see “The Map that changed the World” by Simon Winchester.)  This hard sedimentary limestone, like Dorset’s famous Purbeck Marble too, were long-known to take a polish and which can enormously add to the value of quarried dimensional stone.  Originally Forest Marble was the product of quarrymen in Wytchwood Forest, Oxfordshire.  To Geologists, a ‘marble' is a metamorphic rock but given the U.K. has three limited amounts of true marble any U.K. rock that will take a polish, has been polished.   Dorset fossil limestones, Devonian limestone, Derbyshire alabaster and crinoid limestone, even granites are polished, hammered or honed and can be found ornamentally in almost every Dorset church and many historic buildings. Both types of Forest Marble building stone are particularly strong and impervious because the crystalline calcite cement leaves few pore spaces for the water to penetrate. They are therefore often used for foundation plinths under walls of more porous stone.

Forest Marble, that is Forest Marble limestone, has been long-used as a building stone in S.W. and N.Dorset. It is a non-porous, bioclastic limestone consisting mainly of variably abraded shell, crinoid and coral textures.  From the coast to Gillingham above the Boueti Bed, are large, intermittent lenticular units of very well-cemented flaggy stone beds of Forest Marble and Forest Marble sandstone. These comprise some 30% of the otherwise predominantly calcareous mudstones of the Forest Marble Formation. They are randomly spread and up to 40m deep in an overall Formation thickness of only 45 m. 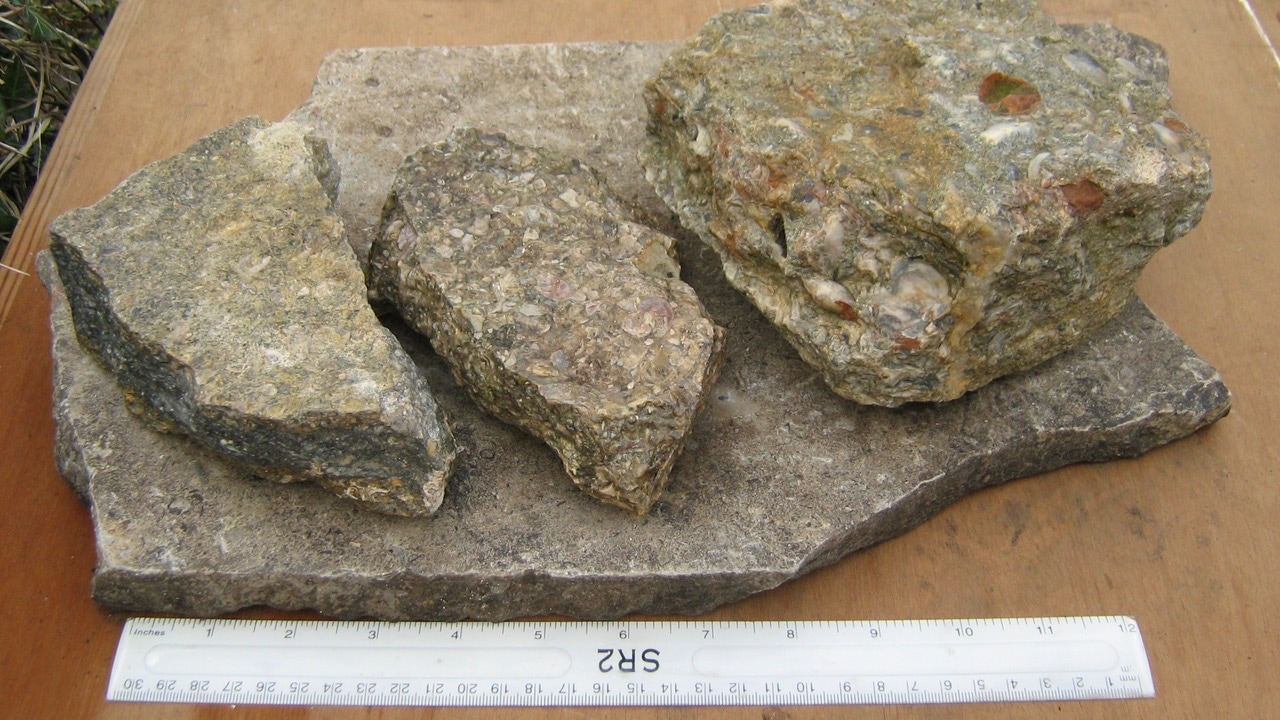 Variable abraded shell size of Forest Marble limestone. L-R 1. Weathered rice-sized shell and yet still blue-hearted. 2. More shelly and 10 mm. abraded shell.. 3. Much larger and with occasionally complete shell debris. From: 1. Folke, 2. Longburton, 3. Stalbridge. The fabric and textures of sedimentary stone varies both within and between quarries. Photo: PB

The Forest Marble sandstone occurs as an inter-bedding within the lenticular units of the regular bioclastic Forest Marble building stone. This flaggy bedding is of a fine grained, well cemented sandstone. It is randomly found along with un-cemented sand layers at any level and meets the shelly Forest Marble beds both laterally and vertically.
Conclusions
Despite its variable bioclastic texture i.e. made up of mostly broken bivalve, gastropod & brachiopod shell, there is usually additional fossil crinoid, echinoid,  and coral present and so often even more bioclastics may be there.  Fine grade sands both angular and rounded are found concentrated in the Forest Marble sandstone and less densely mixed with bioclasts where they hybridise. (are mixed.)  Mixed rounded and angular marine sands are found in varied amounts and sizes - from zero to over 55% across the whole range of Forest Marble fabrics.  The hybridised 50-50% stone may present itself as the more parallel faced flaggy calcareous sandstone but is also found to be more massive and used along with other more well blocked shelly stone in church walls and historic churchyard dry walling.  Well preserved shells can often be found, many together, in bedding planes between separate cycles of better cemented sedimentary deposition.

Buildings utilising this stone are found concentrated in the SW and N of the County.  In the SW the stone colouring tends to be kinder and more orangey than the dull greys of the North but organic coatings of red algae and yellow/green lichens very commonly mask the true colour of Forest Marble built stone. These organics, together or even separately, are to be found on one face or corner of a building and unsurprisingly often those facing the North West. (See Jo Thomas Dorset Stone Ch. IV  p. 33 - 42.)

Calcareous mudstone, bioclastic limestone and sandy limestone together form the Forest Marble Formation. They differ mainly in the amount of qtz sand they regularly contain. Please look again at the thin sections above.  The Sherborne Castle Estate stone FMS is full of + - 80%  - rounded and angular; white, black and grey grains of sand. At the other extreme the four Longburton FMSL photomicrographs have no more than three white grains or less i.e. maybe nine in all. So in a similar area of FMSL stone, quartz sand is seen to be very rare.  In this way, we find that every possible percentage of sand might be found in Forest Marble building stone, anywhere between these extremes.