All photos and images below are by kind permission of the National Trust unless otherwise stated
​For non-geologists please note that photographic information without thin sections must not be taken as sufficient evidence to identify any stone with accuracy
​William Bankes transformed the Kingston Lacy interior into an Italian palazzo with many floors, walls, columns, sculptures, fittings and collector’s items of both local and European stone imported via Venice under his personal supervision.
3. and 4.This striding figure , recovered from the House garden, has the features of Rameses II. According to the Kingston Lacy guide book and their room notes it is a greywacke dated at 123 BC. Most probably it is of Bekhen Stone, a Precambrian metagreywacke sandstone, quarried for sculpting in the Wadi Hammamet Pass; the main Eastern Desert route-way east of Luxor, from pre-historic to Roman times. (Ref. Evaluating the Cultural Heritage and landscape of Quseir - Qift Road: with a special focus on the gold mines and greywacke quarries. 31 Jan. 2017  Univ. Padua, Archaeology Dept. (Fatima Al Fihri Project. http://paduaresearch.cab.unipd.it/10241/1/Tesi_Elsayed_Ahmed.compressed.pdf
The water closet stone is a pelagic limestone  - an intensely altered, veined, deformed and variously coloured sediment. Like all other interior sedimentary stone, it has been deeply buried or compressed, but it is a crinoidal limestone unknown in the U.K. Well known since Roman times, sedimentary evaporites and hard limestones can also be made to take a polish, and to compete commercially with true marbles. 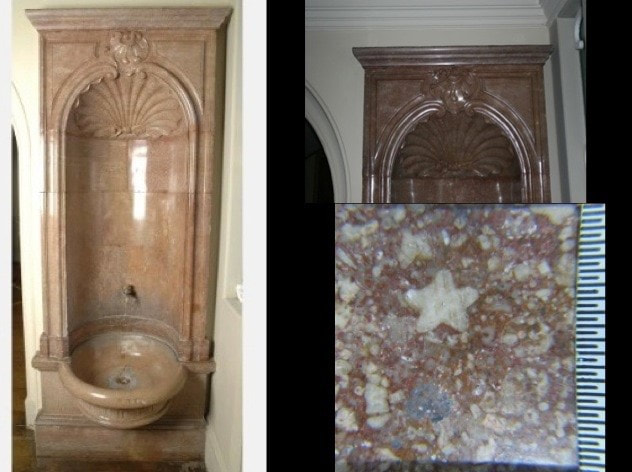 5. Imposing crinoidal bioclastic limestone, probably European not British, was used by William Bankes for the communal faucet bowl, N.T. buffet, set amongst bedrooms and which pre-dated the first proper flushing water closet in Kingston House. Star-shaped crinoid ossicles (Pentacrinus), mussel shell and minute gastropods can be seen with a hand lens.
6. and 7.This bioclastic crinoidal limestone detritus is seen here at low and high hand lens magnification.
Alabaster
Geothite dissemination of oxidised iron, gives the red/browns and less oxidised blue/greys to the staircase balusters of typically cloudy and banded English alabaster/gypsum – almost certainly ordered by Charles Barry from a Derbyshire source.
Verona Red Ammonite Formation
Most polished stone at Kingston House is the Verona limestone, from the Valpolicella Region at the foot of the Alps of the Verona Red Ammonite Formation. (Oxfordian, Upper Jurassic 285 Ma.)  It is an hematitic, stylotised, commonly nodular succession of condensed sediments on an ancient submarine plateau. The "commercial" marbles, polished limestone red-Rosso, pink-Nembro rosato, yellow Giallo, and white Bassano Biancone, are all well represented at Kingston Lacy. The yellow Giallo texture is very commonly nodular and at Kingston, more commonly seen with occasional macro fossil inclusions. Below left is the location of a 1” wide and bisected, Rhynchonella, in the left-hand side Drawing room/ Dining room entranceway.
​Microbial mats were laid down in the Tethys Ocean, preceding the Mediterranean Sea. They were important in trapping and binding the Verona Limestone Formation sediment, giving rise to early lithified nodules and stromatolitic layers.  From the Upper Bajocian to the Upper Oxfordian pseudonodular textures turned to massive bioclastic facies with much fossil content and finally these sediments were characterised by a long period of true nodular facies. The burial and tectonic compression of subsquent Alpine and Apennine orogenies removed vast volumes of material by pressure dissolution and thus stylolites are so much in evidence amongst all Kingston Lacy’s polished Verona Limestone.

​William Bankes added his 1814-1820 Grand Tour Collections’ stone; to that of his father’s inheritance, to Charles Barry’s restoration requirements and his own shipments from Venice between his 1841 exile and death in 1855. At least twenty of the most popular, rare and sought after C19th hard polished stones can still be seen amongst both prominent and even most minor features finally included in the fastidious Italianate palazzo interior to his updated Anglo neo-classic Palladian Exterior.

True Marbles – white, grey and blue Carrara marbles of the Apuan Alps have been predominantly worked inland of Carrara and Massa and multi-coloured breccias, southwards around Stazzema and Seravezza. The geological age of the marbles is invariably of Late Triassic/Early Jurassic origins and metamorphosed in the Tertiary to now contain a vast range of minerals and hence being both variously textured and coloured.
http://www.apuanegeopark.it/ENGLISH_VERSION/apuanegeopark_geology.html
The earliest, UK sculpted white Kingston Lacy Carrara feature, must be in the Library; probably brought from the ruined Corfe Castle. The fireplace panelling is surmounted by rather opaque but purely white Carrara marble Fleur de Lys emblems of the Bankes’ family.(9,10,)
The panelling is probably of a most rare white calcite cemented; coarse grained black graphite disseminated marble - of provenance as yet unknown and far too coarse for Carrara. (Oregon settlers from 1830’s produced the only similarly textured and only there a locally commercial polished stone from the present-day Tate Quarry. This is North America's only source of this once  White Cherokee and now more correctly "Georgia" Marble (12) http://midgagmsorg.ipage.com/?page_id=858 ) 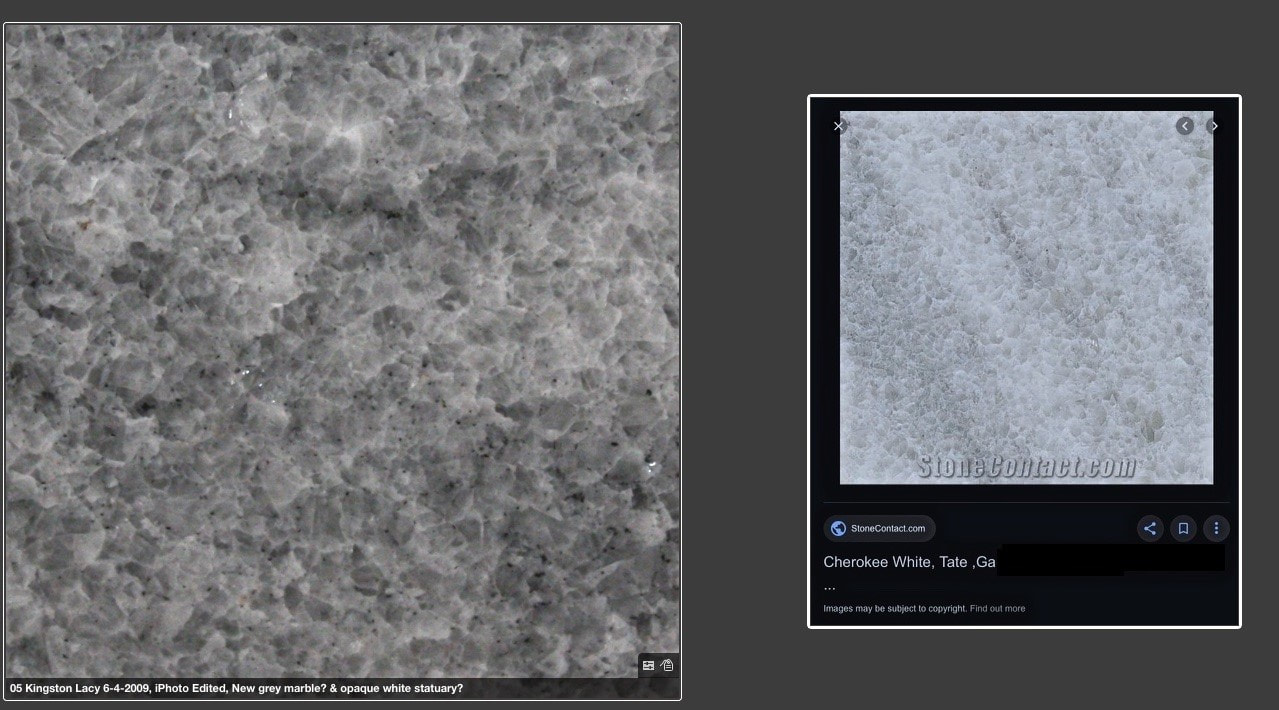 Image 11
Apuan Alps Statuary Carrara is the very finely grained most translucent and pure white marble, whereas the graphite streaked or clouded stone, long called Sicilian Carrara in Britain, is abundant and much used in high status flooring and stairways. (‘Sicilian Carrara’ referred merely re-shipment by Sicilian stone trading ports.
Flaxman’s 1786 Saloon sculpting left (14, photo Daderot) and the Drawing room fireplace(15) exhibit the best white statuary Carrara marble.
​Most commonly amongst the Carrara Marble is a very fine grey/blue colouring and darker veining of disseminated graphite. Where cavities and veining of graphite occur the name Bardiglio Carrara is given.  An unintended serendipity in William’s choice of this graphite bardiglio stone, for this monument to his architectural achievement, must be that Eighteenth and Nineteenth Century Bankes family wealth was considerably based on their Borrowdale graphite wad/black lead mining, in Cumbria. The Bankes's rights to the graphite mining came in 1622 to Sir John following his marriage to Brave Dame Mary and brought in considerable wealth during the Napoleonic wars.

Apuan Alps Southern:Marble
​Production and export of Oligocene-Miocene metamorphosed Seravezza and Stazzema areas’ calcareous marble was maximised during the C19th.  Matching or mixed clasts are along with the matrix, stained with oxides of iron or chlorite and most rarely with manganese piedmontite as below.
Breche violet of the Dining room table (1,2), is the French trade term for this most popular oxidised plumb red brecciated stone but it is not the true Seravezza Breccia Violetta, that is rich in piedmontite – see Saloon niches below. Breccia di Seravezza Violetto, is today’s update, for the N.T.’s. antiquated 19th C. term, Mischio di Seravezza. It’s also not as once N.T. described - as of fleur pêcher – the ancient Greek marble. Nor is this stone the repeatedly metamorphosed Italian Peach Blossom Marble, the Fior di Pesco of the Apuan Alps, which is used in the Drawing room doorway entablatures. (see 23 and 24) 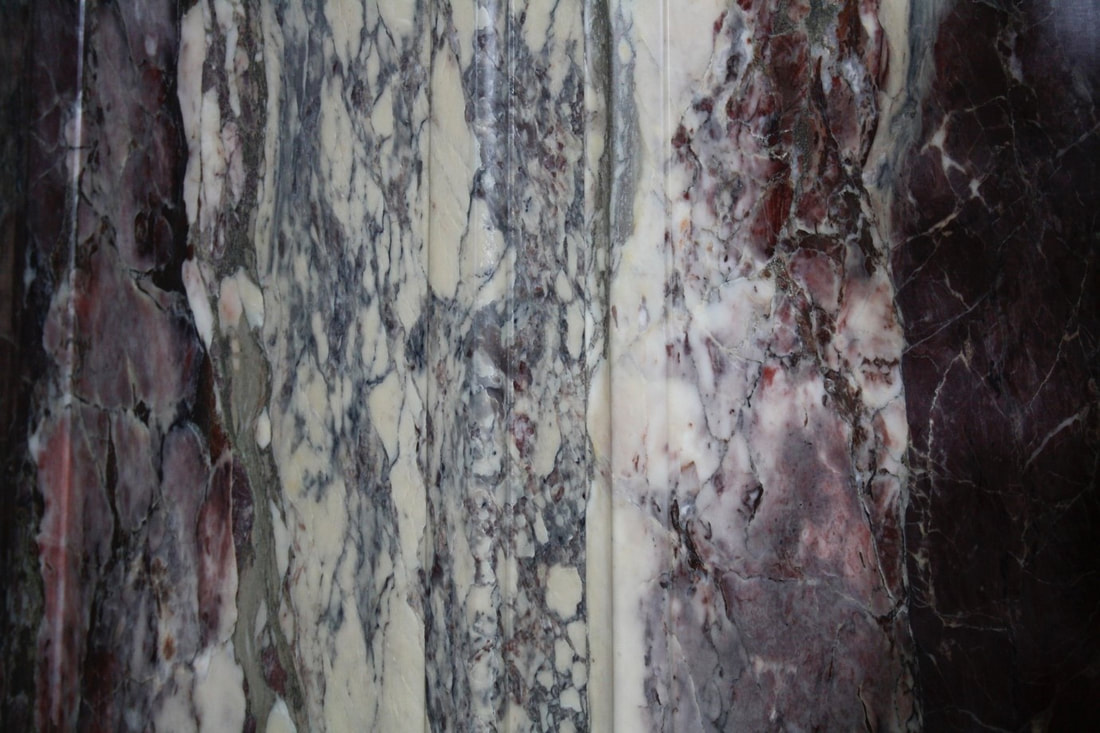 Image 5
Images 3-5 of the Apuan  Fior di Pesco illustrate the rich violet manganese colouration, generated by disseminated piedmontite and also the banded, elongate white brecciation, in a grey/green and red matrix of chlorite and other iron oxides. These two saloon niches represent probably the best known example of this Seravezza Breccia Violetta despite William Bankes dramatic on-site change of mind.
​
These pendants were revealed in the 1930s by Daphne Bankes as thought to have been supplied by the Fabricotti Apuan Alps quarries, as two separate blocks.  On the G M Fabricotti trade website today there is a  photogallery of their principal white-coloured stone. However, they being the largest Italian-owned quarry and trading company, access to the coloured breccias of the Seravezza​ area would have been assured.

​William Bankes’s C19th masons were limited for Italian serpentinites to those from Levanto and or most likely Polcevera at Genoa, Liguria.  Ophiolitic serpentinites and other altered Pyroxenes have been long quarried in Liguria’s techno-stratigraphic units and many textures have probably been all worked out. Best known Genoa textures are well brecciated while classic commercial Rosso Levanto stone is typically a very heavily white calcite veined Magnetite rich bastite serpentine, which causes it to appear a darker green and when hematite rich water, percolates through it, the stone becomes deep red. Traded Rosso Levanto is typically a heavily white veined mix of both colours. Tertiary lithification.